"Language is a virus"

William S.Burroughs, The Ticket That Exploded"

Onym is a web-based, interactive audio-visual project produced by visual artist Niall de Buitlear during the Covid-19 pandemic. The title of the work comes from the suffix -onym, derived from the Greek word "onoma" meaning "name", as found in the words "synonym" and "antonym".

The work is based around pairs of antonyms forming conventional binary oppositions such as "life" and "death". For each pair of antonyms a thesaurus was used to build a chain of synonyms to bridge the gap between them. Starting with one word the process was repeated until its antonym was suggested by the Thesaurus. At that point process was continued, without reusing any words, until the original word was suggested. In this way a complete loop was formed. With each synonym suggested by the thesaurus the meaning was nuanced. The accumulation of these nuances exposes the shades of grey in between words considered to be diametrically opposed.


"“The virus is in part a parasite that [...] introduces disorder into communication"

The work treats language and meaning as something plastic that can be manipulated and explores Derrida's rejection of the Structuralist idea that a concept must be defined in relation to its opposite.

The word loops used in this work were originally presented in the form of an A5 printed booklet and were featured as an artist's project in Circa Magazine in 2006. The format of a booklet was chosen as it enabled the viewer to rotate the work to follow the circles of text. In the web-based version this rotation is achieved through animation and sound has been added. The booklet, like this website, was an expedient, unmediated way to distribute the work directly to the viewer. 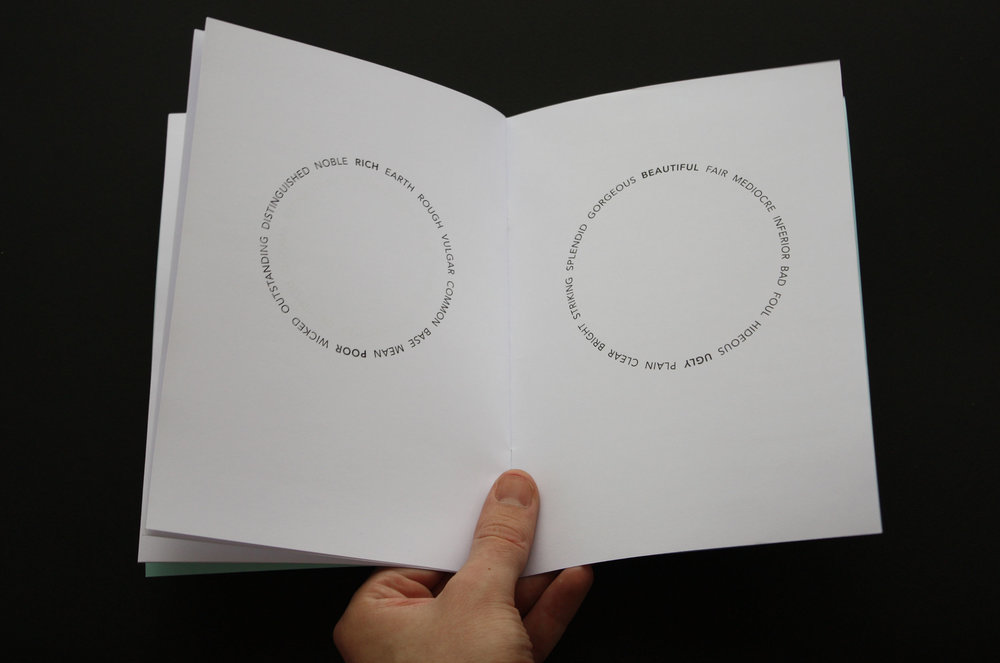 The underlying concept behind the work predates the rise of online news and social media; however, the massaging of language at play in the work resonates with the way language and meaning is rapidly manipulated online to suit a particular viewpoint or to garner attention in a time of information saturation.

A version of the artwork is available for gallery display as a projection installation. In this format the work would be projected on the floor of the gallery space with the viewer free to move through the work and to position themselves in the centre. This requires at least 5-metres square of space to accomodate the projection. If you are interested in staging a gallery installation of Onym please contact the artist.

Onym was funded by the Arts Council of Ireland through a Covid-19 Award.

This website was designed and developed by Niall de Buitlear special thanks to Russell Davies for providing the benefit of his expertise.